The company is maximizing profitsgoal of the Hapimag idea?

Before the 2018 Annual General Meeting, Hapimag-AG informed via internet and email: The Hapimag Group had a high annual profit again in 2017 - the highest in more than 15 years!

But we are shareholders of the Swiss Hapimag AG! - We don't know anything about the results yet! We therefore do not yet know whether this profit will sink elsewhere and if there is hardly anything left for Hapimag AG.

In line with the original Hapimag idea, the goal of Hapimag's business activities should be the “black zero”. The income should cover the expenses - it is not intended to generate a profit!

Some of the numbers for 2017 indicate problems: 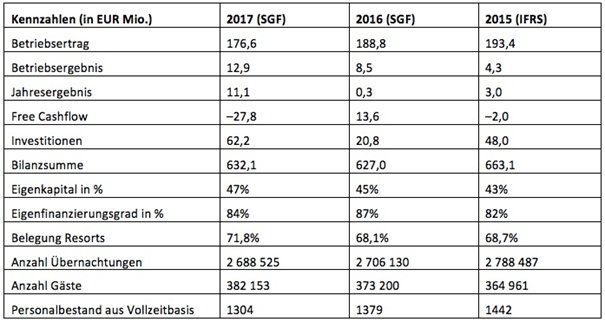 Wikipedia describes the "cash flow" as a balance sheet for determining the cash inflow or outflow of a company for a billing period and further on the negative cash flow: "Colloquially, a negative cash flow is also referred to as" money burning ".

The free cash flow "Free Cashflow" is used to refer to the funds available for distributions and capital services on the Internet at the controlling portal. With these funds, companies can also buy back shares, for example

The Internet advertising for holidays in Hapimag resorts at various tour operators, which is known from the Internet, shows that there is an open promotion of external rentals. This requires demand for the size of such businesses. Have the number of guests and the occupancy of the resorts increased only through external rentals? Should shareholders be squeezed out of the company with even greater external letting?

Goal of the Hapimag idea is the provision of holiday apartments for your shareholders (partners) at cost price. The income should cover all expenses! No more and no less!

The Swiss Code of Obligations and the Articles of Association of Hapimag AG adopted by the General Meeting apply to the stock corporation.

The contractual obligations with Hapimag AG consist of the purchase contract, the respective terms and conditions, and the provisions of the relevant booking information, including the reservation and booking provisions.

In addition, there has been so-called “basic information” for years, which is compulsory under European law on the basis of “Directive 2008/122 / EC of the European Parliament and of the Council of January 14, 2009”!

The annual Fee essentially serves to finance costs that are independent of the individual use of the holiday complex.

These include, for example:

Furthermore, Any surpluses or shortfalls are carried forward to the annual contribution statement of the following year.

The Additional costs local operating expenses are attributed, which essentially arise from the use and use of the services of the holiday complexes.

These are, for example, the following expenses:

In connection with the purchase contract for Hapimag shares, the shareholders have repeatedly received updated basic information.

As an example, we summarize information from the following basic information:

The meaning of all the versions is the same:

"... The corporate purpose of Hapimag essentially consists of purchasing, building or renting holiday facilities and hotels in order to make them available to their shareholders and partners as part of the Hapimag holiday idea. Your business is therefore not geared towards making a profit; any results generated are not distributed, but remain with the company to achieve its purpose. Although formally a stock corporation, Hapimag is structured as a cooperative.... "
(In the originals no bold - here to be emphasized by the HFA).

The exit possible with the "Option Program" was abolished on January 1.1.2018, XNUMX. As already before the turn of the millennium, share buyback lists are introduced. It can be doubted whether such measures are really taken, quote: "dissatisfaction from the system".

The line for the recovery of Hapimag AG (with the withdrawal of shares, a first step towards "downsizing") is obviously no longer being pursued.

No profits but cost-covering prices, that would be the next steps for a future-proof Hapimag AG.

When will the Hapimag tour find their way back to the brilliant Hapimag idea, which, adapted and modernized, will surely continue for decades to come!

>> back to the previous page